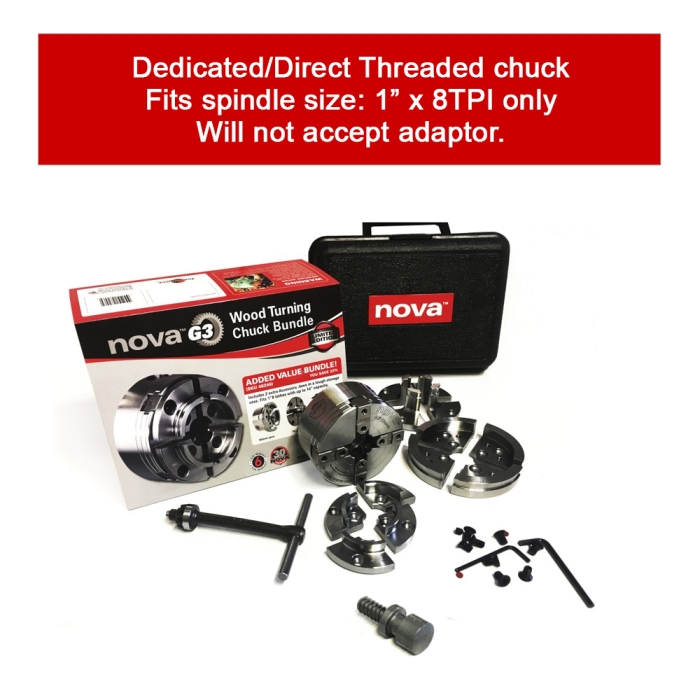 Please Note: This Chuck Bundle is ONLY available to fit 1" x 8 TPI spindles. If your lathe has a spindle that is not 1" x 8 TPI you will need to purchase a different chuck bundle that includes the Insert Type G3 chuck and you will also need an insert/adapter that matches your lathe's spindle thread.

1589993967
Write a Review
Review Summary
Nova Lathes 48246 NOVA G3 Chuck 30th Anniversary Bundle w/ Case   $138.95
5.0
25 Reviews
5
100% (25)
4
0% (0)
3
0% (0)
2
0% (0)
1
0% (0)
100% Recommend this product (25 of 25 responses)
By Bill
Crestview Florida
May 19, 2020
Nova G3 chuck system for wood lathe
After several recommendations from friends, I purchased the Nova G3 anniversary chuck system. I shopped around and found the best price at Tools Plus. The ordering process was simple and quick. I received the G3 well within the timeframe I expected and am very satisfied with the purchase from Tools Plus
By Nelson Figueroa
Eureka, California
March 30, 2020
Awesome Chuck bundle
I ordered this chuck bundle on Friday March 27th and it arrived today March 30th. Super fast delivery and from everything I've seen in the package its exactly how it was advertised on this site. I cleaned the parts with some mineral oil due to the grease on the parts it was packaged in but overall great quality. I used it just a little bit today but it worked just how I expected it to.
I highly recommend this product and the price is great
By Tony Mascaro
south abington township, pa
November 4, 2019
great chuck great price
the 48246 g3 chuck by nova delivers. outstanding quality at a great price. holds the piece with confidence and precision. tools plus really followed through with prompt service. thanks for everything.

Tony Mascaro
ProsA+ quality. simple mount with one hand while holding the workpiece with the other. great package deal.
By Rich
NY
December 26, 2018
Best bang for the Buck
Saw this on Sale at Tools plus and the price was just too good to pass up. Even though it was out of stock, and Backordered, I decided to order it anyway. Tools plus was very attentive to the fact that it was on backorder and would ship it to me as soon as it was in stock. Well I was surprised to see that in about a week I received notice that it was back in stock and was being shipped to me. I received the order in 4 days and I was never charged until the order actually SHIPPED. I also was pleasantly surprised to find that not only did it come with 3 sets of jaws, but it also chucked right up to my Grizzly lathe WITHOUT any adapter. Nice to see Nova finally made something that would match right up to the smaller and mini and midi lathes. The case it came in was great and held everything very tight inside. I am TOTALLY satisfied with this chuck, AND with the way ToolsPlus handled the transaction. Highly recommend this Chuck and TOOLSPLUS!
Pros3 sets of jaws High quality cases Screwed right into my midi lathe, no adapter needed Ease of use
ConsNone so far
By Michael Hunter
FL
May 20, 2020
Great purchase
I needed a new chuck system after mine was destroyed in Hurricane Michael. This system is very well made, easy to set up and easy to use.
Prosgreat value, well made, easy to use
Consnone
By TheDagda
TN
May 19, 2020
Great chuck and best place to purchase!
This is a great chuck set, plus you can't beat the price and great service from these guys.
By Dan
Northern nj
February 12, 2020
Novachuck
This thing is freaking wonderful. I have used the 2 inch Chuck and the screw mount and they have worked like a charm.
The insert mount that grabs a small uncut and draws the price in and holds it... Just works.
ProsMultiple uses.
By Duane
Denver, Colorado
January 21, 2020
Looks like this will work on my 1976 shopsmith, which I just started useing Dec 2019, Duane
Fast shipment, arrived in good condition, will use some day with my Shopsmith
By Kenneth Willmott
NY
December 30, 2019
G3 package
Excellent product. Fast shipping
ProsExcellent
ConsNone
By Rok Hoblitzell
West Virginia
August 28, 2019
Nova G3 Chuck!!! 30th Anniversary Bundle
First this is a great product! The G3 chuck is a wonderful and reliable chuck that will not let you down. Plus the bundle with the two extra jaws! How can you beat that? You wonâ€™t go wrong with this chuck. One of the best made and economical wood lathe chucks produced.
ProsWell made Economical
ConsNone that I have found yet!
By Peter Eldracher
MI
August 3, 2019
Nice Chuck
Bought this for my Harbor Freight mini lathe. Fits very nicely and is not too heavy. This is the first chuck that I have ever purchased and I am very pleased with it. It is well worth the money.
By Bill
AR
July 22, 2019
Works very well
Great chuck. Get yourself a t handle allen wrench to speed up changes
By Walt
Gettysburg, PA
March 24, 2019
Excellent Value for High Quality Chuck and Jaws.
I bought this for my son. He needed various jaws to be able to turn a variety of head mounted stock. This set works perfectly. The 30th Anniversary Bundle provided him with jaws that would have easily cost another $60 to $120 more had we bought them separately.

ProsExcellent Quality and Excellent Discount
ConsNone. (Although an extra set of screws would be nice since there are so many jaw sets.)
By Don
California
March 13, 2019
Good tool, good company
Great bundle for a mini/midi lathe. Well made, multiple uses. Good price, and quickly shipped.
By A. Sharrock
Kansas
February 8, 2019
best for the price
very well made, all kinds of adjustable, just what I needed
Prosdoes everything I wanted it to do
Consnone
By Robert
Maine
January 16, 2019
Awesome
Product arrived in great condition and works just fine.

Ordering was easy!
ProsEasy to use
By Steve
Arizona
January 8, 2019
E
Great Price, Great Shipping-Great company!
By Michael
TX
December 31, 2018
Love it
I like the Nova Chuck in that you can use any set of jaws on any Nova chuck.

By Nathan
Missouri
December 30, 2018
Very impressed overall
First time buying from this company. Very impressed with how fast the shipping was. The product showed up a day before scheduled and the price could not be beat by anyone else. Will be doing future business with this company.
By John W
Toms River, NJ
December 21, 2018
Great set at an unbeatable price
I'd been watching for deals on this already great set for over a year. Regardless of price it is truly a great chuck set covering the full range of stock sizes you'd want to turn on a mini/midi lathe. Case is solid and well padded so should last a lifetime, though the chuck is not likely to spend much time in it. I now have 2, and being able to quickly switch between the pin jaws and the 2 inchers is a huge timesaver.
Pros- Stong and fast grip mechanism - Full range of jaw sizes - Great case to securely store extra jaws - Built in 1" x 8 tpi thread to retain reverse rotation and save the little bit of space the adapter steals - Amazing price (129)
Cons- Chuck key can take some fiddling to drop into place, but once there, it is solid! - No dovetail or ribbing on inside of pin jaws, though they're plenty long to support
By Jeff
Tulsa, Oklahoma
November 9, 2018
Nova chuck
Best pricing, quick shipping.
ProsEase of use everything I needed to get started in one package.
ConsNone I can think of
By Homero
washington
October 15, 2018
great firstchuck
came with everything i needed to turn my first bowl on my lathe. great kit with vest price I could find anywhere and fast delivery.
Prosperfect for everything I've needed it for so far
By Dan
Ohio
October 11, 2018
Get'em while their hot!
These were alwsys sold out at my locsl retailer, so I new they were an excellent value at only 139.00. Well made with all the accesories to boot. Works great on my midi lathe. I am new to woodturning but I figure this should be a solid investment as I improve my woodturning skills. Largest jaws csn accept up to 4 inch tenons, intended for up to 14" diameter bowls/plates. Aldo includes a 2 inch jaw set and pin jaw set.
ProsNice case. Well engineered chuck from machine steel. Built to last., with 6 year warranty. Chuck has smooth one hand operation for opening and closing jaws. Takes more Nova chuck accesories available as a separate purchase.
ConsChuck and accesories are coated with a heavy film of oil, but that is to be expected Can only thread onto 1 inch 8 tpi lathe spindles.
By Jeff
Wisconsin
October 7, 2018
Easy to Use
This is my first chuck that I got mainly for drilling holes in pen blanks. Iâ€™d like to do more later. I got it setup without a problem and works great.
By Tool Agnostic
California
July 30, 2018
Great Chuck Set at a Reasonable Price - Nova Lathes 48246
I recently bought a used Delta 46-460 midi lathe. The seller included centers for spindle turning, but did not include a faceplate or other means of doing face turning for bowls, etc. I had seen the Nova G3 30th Anniversary set on sale at Rockler a few months ago, but did not own a lathe at the time. Since then, they have been discontinued by Nova - they were a "limited edition."

I wanted the Nova G3 30th Anniversary chuck set because it came with a variety of jaws, and had a nice plastic case. It was hard to find, because it was a limited edition that had been discontinued. I found it at Tools Plus for a reasonable price. Tools Plus seems to be the only source for this set - they must have had some left to sell.

The Nova G3 30th Anniversary chuck set arrived in California very quickly, only a few days after I ordered it. I am impressed with the build quality. I ordered a set of Nova pen jaws for it. (By the way, the pen jaws fit inside the case, in the finger holes for the chuck itself. I turned them so that the wood grabbing edges face away from the chuck itself.)

The G3 chuck is easy to use, and it works very smoothly. The build quality is superb. What can I say about a chuck? It has jaws that open and close. The Nova chuck key fits perfectly, and I could have easily tightened the jaws far beyond what is necessary.

Sorry that I cannot report about using these jaws with bowl turning, but I have not reached that level of skill yet.
Pros* A nice set with multiple jaw options, including a woodworm screw. * Build quality is exceptional. * Easy to use. * This G3 chuck is the reversible type. It includes a set screw so that the chuck can work with my Delta 46-460 lathe in the reverse direction. I have not yet tested this feature.
Cons* Comes with exactly 8 jaw mounting screws and one set screw (for lathes that can turn in the reverse direction). Don't loose any of them! I bought an extra set of jaw mounting screws at my local Rockler store in anticipation of when one of them rolls under something big and heavy, or simply disappears. * The preservative oil that ships on the chuck and other parts is messy. I cleaned it up, but not well enough. The chuck still left oily rings wherever I set it down, even after cleaning. Don't put your new chuck down on nice wood!