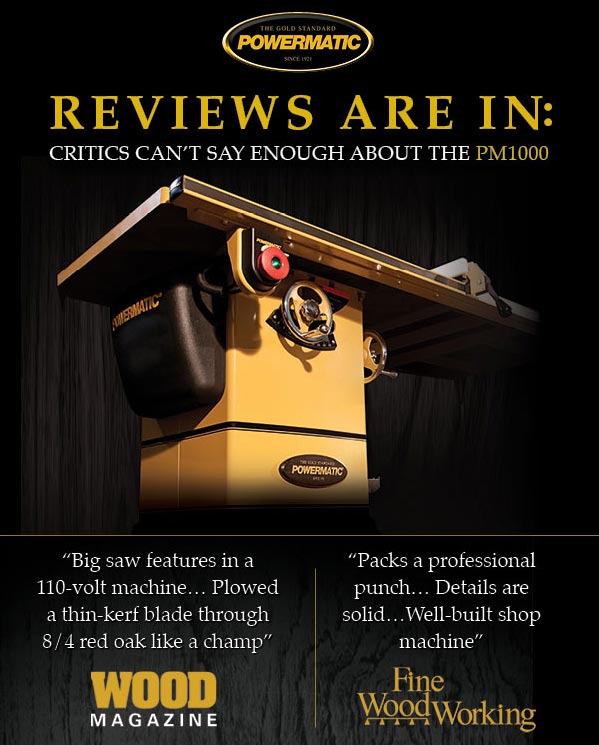 Powermatic continues to develop products that keep your workshop running strong, and now they've developed a product that you can bring home to plug in. Introducing the Powermatic PM1000 Cabinet Saw. This is the first Powermatic cabinet table saw that is wired for 115V use. Along with the 115V set up, this saw pumps 1-3/4HP from its poly-v belt motor for some serious output. Need a larger rip cut to the right of the blade? The PM1000 offers you 52" with an exclusive Accu-Fence system that's both stable and rigid. Get everything you'll find in a larger cabinet saw right here inside the PM1000. Don't miss out of the chance to own this dynamic unit that's built to meet the Gold Standard.

Aside from a fraud hold from the bank, the order went through without any problems. I received the shipment in less than a week, but they could not deliver to my house. I had to rent a trailer and pick it up from the freight company, not a big deal. After unpacking I notice the base had broken through the pallet and had some damage to the foot bolts.. I called Powermatic and after sending some pictures and emails they shipped a new base. It took me about an hour to get it on the saw, and then another 2-3 hours to assemble and calibrate the saw by myself.

Fit and finish are good, there are a couple of spots on the wings that aren't ground 100% flat where they attach to the top, it feels slightly rasied when I run my finger across the seam but it hasn't affected the performance at all. It takes a few seconds to spin up at 110v, so I switched to 220v and it comes to speed almost instantly. Dust collection is great, and the changing blades is a snap with the arbor lock.

When it comes to cutting, I can get repeatable sub millimeter accuracy with this thing over and over. The fence is deadly accurate after calibrating and the miter gauge is pretty decent out of the box.

Overall I am extremely pleased with the saw and it has really upped my woodworking game.

ProsAccuracy, build quality, safety, ease of blade change.
ConsNot a darn thing.
By jeff h.
pickerington, ohio
May 13, 2014
excellent saw and buying experience!
i bought the powermatic pm1000 table saw from tools plus and i couldn't be happier with the saw or my experience with tools plus. the directions for putting the saw together were very clear and easy to understand and all parts were there. the saw was shipped quickly and i wouldn't hesitate to order again from tools plus. thank you!

By Dan
Buda, Texas
September 23, 2013
Great Saw
I struggled with purchasing a cabinet saw because of the cost, then PM offered this model and I was sold. It is everything I want in a cabinet saw.
Prosprice fence system cast iron top and wings heavy steel cabinet construction dust collection